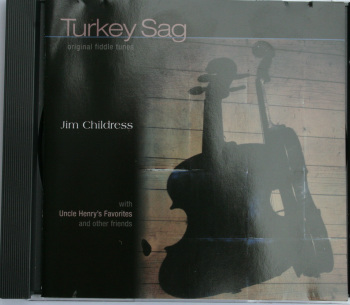 This CD has 16 original fiddle tunes and can be purchased directly from me by mailing $15 and a return address, or it will be available shortly through CD Baby.

1. The County Fair (GDAE).  This is a three part tune in the key of F named after the Albemarle County Fair, which for many years ran an old-time fiddle contest.
2. The Old Hotel (GDAE).  This D tune has an extra measure in the first part, to keep you from getting too complacent.  The name comes from the old hotel in Glenville, WV, where weary festival goers would get a few hours of sleep, one time memorably interrupted by police investigating a murder in the next room.
3. Laurel Fork (GDAE).  This is another D tune named for a beautiful place in Highland County, VA, near the West Virginia line.
4. The Dark of the Moon (GDAE).  I wrote this waltz because of an interest in trying something in the key of Bm, which is a very sensible fiddle key (same notes as the key of D).  There are some traditional Irish fiddle tunes in this key (The Musical Priest, for example), and I think the key is worthy of more exploration.
5. The Road to Malvern (AEAE).  My wife, Barbara, particularly liked this tune and asked that I think about naming it for her.  She was born in Malvern, Arkansas, and she and I both fiddled on the recording.
6. Turkey Sag (GDAE).  I wrote this tune in 1977 or 1978, and feel like it was the tune that made me consider being more serious about composing tunes.  Somehow it came to be very widely played years before this recording.  I wanted to have some say about how the tune actually goes.
7.  It's All Right Now (GDAE).  This is a 32 bar tune in G with some surprising emphasis.
8. Firefly (AEAE).  This modal tune works well in either cross tuning or standard tuning.  The high notes in the second part reminded me of fireflies on an early summer night.  Pete and I played this as a fiddle/banjo duet.
9. Short Stack (GDAE).  When I wrote this, I was trying to incorporate some of the bowing feel that Doc Roberts got on Deer Walk and Martha Campbell.
10. Long Way Home (GDAE).  This is a melodic G tune named for its somewhat wistful feeling.
11.  Halfway Pond (GDGD).  We played this in cross G tuning on the CD, but I usually play it in standard tuning.  Halfway Pond is near Pinewoods Camp, a well known dance camp near Plymouth, MA.
12. Leo's Lullaby (AEAE).  I named this tune for Leo Shannon, son of my long-time friend Paul Shannon, when Leo was a baby.  I recently played guitar for Leo when he won the youth fiddle division and took 4th place overall at the festival at Clifftop, WV.
13. Falling Off a Log (GDAE).  I thought that this tune was as easy as falling off a log.  It is a little odd, because it is a D tune that starts on an A chord.
14. Coming Through (AEAE).  I played this tune alone on the CD and named it for the get-out-of-the-way feel that it gives me.
15. You're So Sweet/Down By the Creek (GDAE).  This is a medley of G tunes.  The "creek" is the small stream that flows into the Moormans River in White Hall, Virginia where the Motleigh Musicalia has been held for many years.  On Sundays at the festival there is often a sweet jam session in that spot before people start to head home.
16. It's So Quiet (DDAD).  I wrote this waltz shortly after our youngest child, Evan, left home for college, and I was struck by how much quieter our house had suddenly become.  Somehow the way I felt that day just seemed to come out in this tune.  Woody Guthrie said that the more complicated a song was, the worse it was, and this tune adheres to that aesthetic.