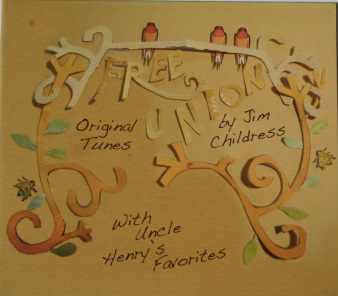 The CD includes seventeen original tunes.  It can be purchased by mailing $15 and a return address to Jim Childress, or online through CD Baby.

1. Meadowhawk (AEAE).  I played this tune in cross tuning for the recording, but it also works well in standard tuning.  The name comes from a family of dragonflies.
2. Shadowdragon (GDAE).  Shadowdragons are another family of dragonflies, and I liked the connection between the relatively dark feel of both the name and the tune.  Although the tune is modal in nature, the chords are all A and D.
3. I Come To Win (Fair If I Can) (GDAE).  This title was a favorite saying of my grandfather, who would sit down to a game of cards with this announcement.  This is a G modal tune that probably owes something to G modal versions of Polly Put The Kettle On.
4. Eye Of The Beholder (GDAE).  This is a waltz in the key of D.  I thought is was a little beauty and thought that beauty is in the eye of the beholder.
5. Free Union (AEAC#).  We live in Free Union, VA, and I have always liked the name.  The first part of the tune only has 7 measures (rather than the usual 8), and the Black Mountain tuning gives it a good sound.
6. Walk The Cat (GDAE).  We recorded this C tune with Pete Vigour on a second fiddle.
7. The Goldfinch (AEAE).  There is an Irish fiddle tune by the same name from which I got some of the elements of the first part.  But just as the Irish and American goldfinches are different species, this tune is quite different from that one.
8. Evan and Leah's Wedding (GDAE):  Barbara and I played this as the first waltz when our son, Evan, married Leah.
9. Square Peg (GDAE):  Arnie Naiman and I recorded this as a fiddle and banjo duet.  I named it Square Peg because it is not consistent in being either "modal" or major, and so does not fit exactly in either category.
10. The Woodcock (DDAD).  This tune has a sweet and stately feel to me and is evidence of my fascination with this fiddle tuning.
11. Better Watch Out (AEAE).  This is another modal tune dominated by A and D chords.  The name reflects the ominous feeling.
12. Easy Street (GDAE).  We did this with two fiddles, and all the instruments to give it a jam session feel.  It is a pretty straight forward D tune.
13. The Dreamer (AEAE).  This was recorded as a solo fiddle piece. We have also played it faster with more instruments and square timing, but it felt a little more distinctive this way.
14. Albemarle Hornpipe (DDAD).  While this tune does not have the lilting feeling of a standard Irish hornpipe, the notiness, the triplets, and the tempo match the sorts of tunes that many Appalachian fiddlers refer to as hornpipes.  Albemarle is the county in which we live.
15. Rocky Creek (GDAE).  Rocky Creek runs through the woods near our house and can be seen on the topographic map that is printed on the face of the CD.
16. Romney's Retreat (DDAD).  Trying to add to the repertoire of DDAD tunes, this is the third one on the CD.  It could be thought of as a companion piece to Greg Conote's Obama's March To The White House.
17. Allie and Topher's Wedding (GDAE).  This was the first waltz at the wedding of our daughter, Allie, and her husband Christopher.